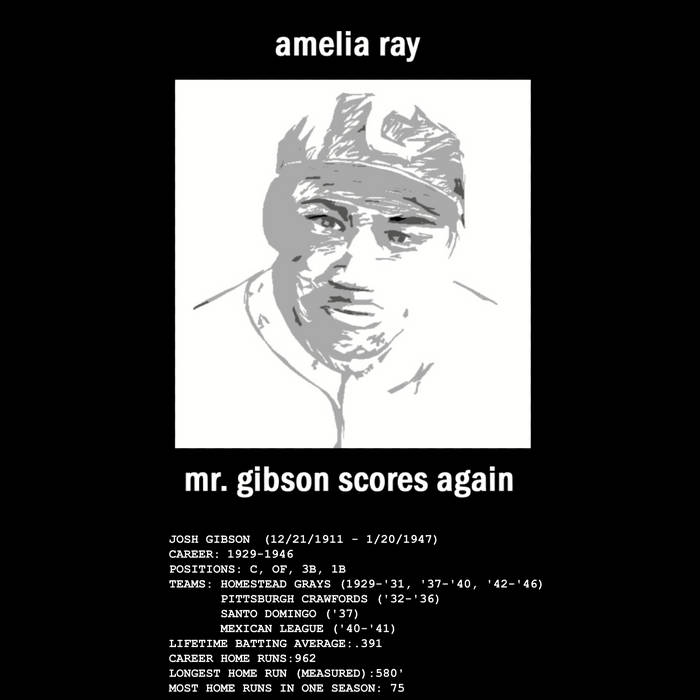 The music scene today is in need of a singer/songwriter like Amelia Ray. In an age where successful female artists are either in the folk genre or over-produced divas, Amelia Ray is her own entity. >Her latest CD - "Mr. Gibson Scores Again" - is her breakthrough.

Completely written, produced and performed by Ms. Ray herself, this disc is a tour de force of deep, soulful vocals, clever lyrics and skilled musicianship. Ray shows she is able to play most of the instruments with amazing ease.

If you have heard Amelia's early work and perhaps passed her off as another folkie, listen again. Her early work may sound a bit homemade, but her lyrics cut deep, and her music is edgy enough to beg for the accompaniment of a good electric guitar and funky bassline. However, with "Mr. Gibson", Ray has not only topped her early work, she has taken her music to a different level.

From the free-spirited romantic ditty "Iberian Girl" to the politically motivated "Whosyerdaddy?" to the lyrically brilliant opus "Sam He Is" - Ray has proven herself as an artist who is ready to break away from independent status and gain some attention from those who take modern rock music seriously.

Amelia Ray is the Adventurer of Rock and Roll.

Talk about your dirty old man
You got a bird in the bush, and two in your hands
Someone's on the phone crying, "We need relief,"
And all you have to offer is a measure full of grief
Everybody knows, it's the daily news,
That you're just trying to walk in your Daddy's shoes

You better heed what your Daddy cried,
"Try to wipe the dung off your boots before you step inside"

Driving everybody insane
You got greed in your eyes and war on the brain
(more money, more power)
Just to prove that you're not a heartless fool,
You do your best Marv Albert at the Cardinal rule
(marv albert, more power)
If they try to tell you that your foot's in your mouth,
You say that's the way we do it in the south

You better heed what your Daddy said,
"Don't you let the power of the press go to your head"

If you knew how much I loved you
(If you knew how much I cared for you)
Would you put my mind above you
And bear all and more, unfasten,
(Would you take my hand and lead me to the promised land)
To the secret of your passion?
Would you feel the hand that holds you
(I can give you all that you need)
Reach down into your soul? You
Have so much more to live for
(Won't you make some time with me?)
If you let me try to give your...

She get up this morning, say she don't like my Florentine no more,
Packs her bags and asks me can I help her at the door,
I look around, searching for strength and then I say,
"No babe, I'm not gonna hurt you that way"

She says "The last time I thought it was forever, I was wrong then, too,
Believe me, babe, it's got nothin' to do with you,"
I make-believe that I am bigger than I am,
But I can feel her cringe when she hears the door slam

She says, "Can we talk this over like rational people?"
I say "I lost all sense when I caught you creepin'
And, anyway the time for talk between us has passed,
We need to find something that will last

I'll drive you down to the beach where I can clear my head,
And maybe, if we're lucky no one will end up dead"
I think for a minute I may let her go,
Then I think about the spinach on the kitchen floor

(She can do better if only you let her)
She can do better if'n you let her
(She's a go-getter like Loma Prieta)
She's a go-getter
(Just like in the movies, she'll be all she can be)
Just like in the movies, be all she can be
(See that what she should see)
See what she should see
But if she don't wanna be with me

I'll take her down to the ocean,
I'll throw her in
Wipe the salt from my eyes, this is the end
If she has this need to be free, I hang my head in misery

Walking along, singing a song that I wrote for my girlfriend
Well, it seems that fall has finally come this way
I was surprised, she was obliged, asked me why I thought she should stay
And, for all my thoughts, I found I had nothing to say

I never thought that I'd be stumbling down this road again
Well, you'd think I'd learn from all my past mistakes
But here I am I'm standing face-to-all the pretty pictures under my bed
And, inside, I hear that nasty little tremor of questions start to quake

Is it me? I don't know
Some would say she should go
'Cause I'm only going to end up saying no

(Have no fear)
They say it's not so bad to run around
(Sow those oats, dear
What's this here?)
But the only time I wanna be in somebody's arms
Is with my feet flat on the ground

Was that real? who could say?
Did she mean, "Come my way?"
Well, we'll find out over wine and cheese today

Nine minutes from now
You'll be sitting here saying, "I should be getting down"
And getting nothing done
You'll still believe that the answer will come

Looking for you, specifically,
Like some census-taker with a mission and a decree
"That's not jazz," you say and turn the tune up and tap the time away

Oh, St. John, can you help me?
I'm so lost and I can't see
Thought it was over, but it's just getting worse
Is there an end to this curse?

I'd have thought it a phase
If I had been able to get up on the 9th day and walk outside
Is it better to view the simple things that people do
Or close my eyes and try to hide?
I have watched the sun set and divide the sky
Into what I can and cannot have
Tell me why I should not cry

Oh, St. John, can you heal me?
I'm so afraid
Do you feel me?
I try to behave like I'm all that I need
Please give me something to breathe

(Can you help me?)
I need a little something
(Can you heal me?)
Don't wanna go outside
(Can you save me?)

Oh, St. John, who could save me?
Am I in need, or just lazy?
I like to believe there's a reason to exist

I guess I have a penchant for being used
I let you come around and do what you will with my blues
But, baby, that's alright
I'd rather be blue with you than happy with somebody new

You push all my buttons and tease
Test my hate and my love degrees
But, baby, that's just fine
I'd rather wait for you than play with someone in the meantime

There's a man in Barbados who knows the score
He gives the people a little, then he takes it back,
But they still cry, "More, more"
He owns four shirts that look just the same
And no one remembers his name
When he's out on the square, the light in his hair
He smiles and say, "I am your saviour"
An old woman stands, takes a flower from his hands
But she don't know what he gave her

The people all gather to see the man with the marvelous eyes
He tells them of the wonder and the healing of love
And finally of tithes
They all seem quite convinced that this is what they meant by messiah
For no matter how close they get, he seems larger and higher
They all bow down before the man with the score and beg he look down and bless them
The old woman stands, flower wilting in her hands, and says, "I have a question"

She says, "Lord, my Lord, why do I call and you not come?" He says, "Woman, I've got to give to all of these people here, so stand in line and you shall get some"
But when she turns around, the look in her eyes goes from sorrow to rage to a frown
She picks up the petals of the flower he gave and with one blow she knocks him down
The people all fall silent at the sight of their leader's demise
The old woman stands, throws the flower from her hand, and says, "Let's think on this for a little while"

She says, "Lord, my Lord, why did you send the man with the score? You give the people a little, and, then, you take it back, but we still cry, 'More, more'"
But when she hears no reply, she lets out a sigh as she watches the crowd disperse
The man with the score, his body now sore, says, "At least I was well-rehearsed"
Now when he's seen on the square, dull white in his hair, he smiles and says, "I'm just a player"
The old woman stands with beads in her hands, and gives up a prayer

Bandcamp Daily  your guide to the world of Bandcamp

Featuring Gary Bartz, 5 years of Rhythm Section Intl and an LP of the week by Nicolas Jaar